On October 13, 2019 the Roman Catholic Church canonized the Englishman John Henry Cardinal Newman (1801 – 90) as a Romanist saint. This brief introduction looks at what this means, and sets out something of the life of Newman.

The Roman doctrine of sainthood rests on a number of errors including the doctrine of Purgatory, the veneration of the saints and their relics, the intercession of the saints, counterfeit miracles, Papal authority, and Papal infallibility. In the Roman system saints on account of special merit bypass Purgatory after death and enter into the immediate presence of God. There ‘they proffer the merits which they acquired on earth’, and can be invoked by the prayers of the faithful upon earth to intercede for them for the working of miracles. Their bodies are also authorized to be special objects of veneration. Rome teaches that it can infallibly determine who such persons are, usually after examining alleged miracles, which are claimed as evidence that they have the beatific vision and are able to intercede for those who venerate them.

The case of John Henry Newman has been a particular embarrassment, however. When attempt was made to exhume his body for removal to a shrine for veneration no human remains whatsoever were found. Moreover, although the movement to have Newman canonized was initiated in the 1950s, it became obvious that miracles were simply not forthcoming. The call for the faithful to submit ‘evidence’ of miracles became ever more urgent, and in desperation the bar was lowered to accept two cases where the most likely outcomes would have been the same had the alleged miracles not taken place. The Church of Rome has in this case shown itself more corrupt than the mediaeval church, for at that time most counterfeit miracles were attributed by local unscrupulous clerics, whereas now the deception is being foisted upon the faithful from the very top.

John Henry Newman was the most famous English convert to Romanism in the nineteenth century. A nominally Calvinistic Evangelical from his mid-teens, he took Anglican orders and was appointed to the influential position of Vicar of St Mary the Virgin in Oxford, whereupon he rapidly embraced liberalism. Under the influence of Keble, Pusey, and especially Froude, he then shifted to an Anglo-Catholic position: ‘From Froude I learned to admire the great mediaeval Pontiffs’, he ‘taught me to look with admiration towards the Church of Rome’. The ‘kindly light’ that Newman sought to lead him as he returned from his trip to Rome with Froude in 1833 was the Roman magisterium, which like that of the angler fish amid the encircling gloom of the deep sea lures its prey within its jaws.

Newman subsequently threw himself into the Oxford Movement, which sought to infuse various Romish practices into the Anglican church, and advanced its cause through a series of pamphlets known as Tracts for the Times, as well as sermons which he admitted were ‘calculated to undermine things established…I am disposing [my hearers] towards Rome’.

In his notorious Tract 90 of 1841, out of ‘a secret longing love of Rome’ but ‘without disclosing what I was doing’ he taught that it was acceptable to subscribe the 39 Articles of the Church of England, its articles of faith, ‘interpreted, not according to the writers, but…according to the Catholic Church’, for ‘I wished to go as far as possible in interpreting the Articles in the direction of Roman dogma’. This tract drew a furious response from the University and the bishops, and Newman was ordered to desist from writing further tracts. Newman regarded this outcome as a victory: the reaction had drawn nationwide attention to the tracts, which remained in print doing their insidious work. Thereafter being ‘on my deathbed, as regards membership with the Anglican Church’, Romanist clerics fed him a rich diet of Romish books until he became terrified to die outside the Church of Rome, and craved to be received into her communion in 1845.

Newman knowingly used his great communication skills to mislead: ‘I was not unwilling to play with a man…I used irony in conversation, when matter-of-fact men would not see what I meant.’ But in 1851 he was prosecuted for criminal libel. Though he privately admitted to his Roman superiors that his scurrilous statements were supported by no evidence, he publicly chose to contest the charges and was found guilty on 22 counts, thereby racking up huge costs and damages for his Church, in today’s money worth over one and a half million pounds.

Then in 1863, outraged by an accusation in a magazine that he had implied that ‘truth for its own sake’ was not always virtuous, Newman threw himself into producing his Apologia pro Vita Sua (‘A defence of his life’), which resonated brilliantly with the contemporary spirit of being ‘true to oneself’, contending that ‘obedience even to an erring conscience was the way to gain light’. The work is widely celebrated as a tour de force, with laudatory comparisons being made with Augustine’s Confessions. But whereas Augustine’s classic is theocentric and traces the work of God in himself, Newman’s Apologia is a cleverly written odyssey into darkness, a thoroughly egocentric, self-serving exercise in self-justification that glories in apostasy, arrogance and craftiness. As Rev. Maurice Bowler of the PTS rightly observed, having read it with revulsion,

There you see smooth, carefully chosen words which only thinly disguise a web of deceit and intrigue which would seem to be unique in the religious history of this country.

As for Newman’s teachings, though they greatly influenced the direction that Rome took in the Second Vatican Council and since, they are not (yet) official teaching. The reason why Rome is so keen to canonize Newman is that this opens the way for his being ‘numbered with Athanasius and Chrysostom, Augustine and Aquinas, among the Doctors of the Church’ (Cardinal Avery Dulles), whereupon his writings will gain special, permanently authoritative status. So what is it about Newman’s teaching that is so compelling to the Roman Church? It is this: Protestants have rightly pointed out that when compared to Scripture and the Early Church much of Romanism appears as either a corruption of the original deposit of faith, or unbiblical innovation, or accretion from false religions. Rome contends she had a tradition that is every bit as authoritative as Scripture, a divine promise of indefectibility, and Petrine primacy with papal infallibility. Evidentially, Protestants have by far the better of the argument, and this Newman sought to defeat by inventing a theory of doctrinal development readily assimilable by the Roman church. Essentially, this is the doctrine of organic growth and continuity: that just as natural organisms in time develop features that were not visible hitherto, but yet are not foreign bodies or corruptions, arising from the essential principle of the organism, so all the doctrines objected to by Protestants were present in the Early Church and were part of the original deposit of faith, though not manifested for centuries. Accordingly, ‘the doctrine of Transubstantiation…[is] part of the original revelation’ but the Church Fathers never mentioned it because ‘No doctrine is defined till it is violated’, which occurred centuries later. Thus the Church of Rome, by embracing Newmanistic doctrine, claims that it can be both organically unchanging yet vitally developing its doctrine, such that ‘it is lawful, or rather necessary, to interpret the words and deeds of the earlier Church by the determinate teaching of the later.’ Such a hermeneutic could take one anywhere.

On a second front, Newman quite deliberately ignored the greatest challengers to decadent Romanism and constructed straw man opponents, such as his Via Media, that were easy to knock down, leaving Rome standing. To dismiss at the outset Calvinists as mere heretics, and the Reformed faith on the (false) grounds that it has ‘no intellectual basis; no internal ideas; no principle of unity; no theology…no straightforward view on any one point, on which it professes to teach, and to hide its poverty, it has dressed itself out in a maze of words…[without] any pretence to a position’, portrays a man more as a blustering charlatan than Doctor of the Church. Those who seek sound arguments in Newman’s writings will be sorely disappointed. Newman quite deliberately avoided setting out his presuppositions and premises for he did not wish anyone to be able to demonstrate that his premises were false, his methods fallacious, and his conclusions unsafe.

Newman’s life stands as a warning both to the unregenerate within the visible Church, and to wishy-washy Evangelicalism that is not confessionally grounded. Though ‘more like a devil than a wicked boy’ in his youth, he never experienced Evangelical repentance and conversion, such that his appointed editor of his letters records that

it [is] very doubtful in the eyes of normal Evangelicals whether he had really been converted at all. Indeed, at various times of his life…letters…were addressed to him…assuring him that he did not yet know what conversion meant, and that the all-important change had still to be wrought in him if he was to be saved.

Newman instead ended up trusting in baptismal regeneration and membership of the Church of Rome. 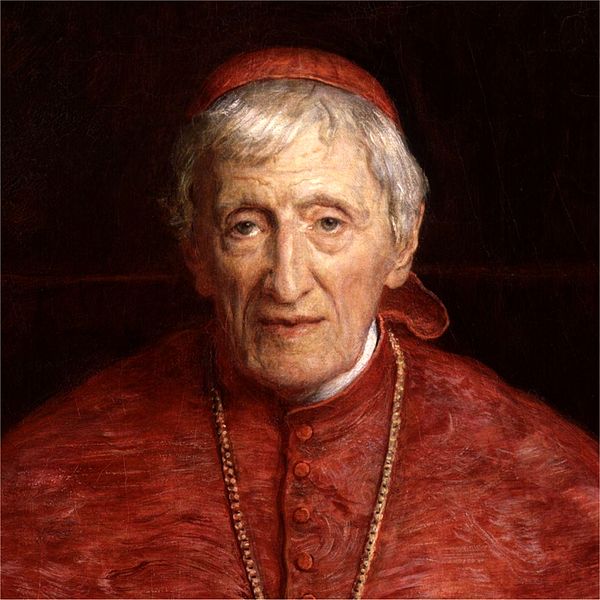